This past Sunday February 16th, I had the honor of participating in a large conglomerate choir of churches from around the area in a concert held by the Youngstown Symphony Orchestra. The concert was part of the  YSO’s Stained Glass concert series and took place at the First Presbyterian Church in Hubbard. These concerts are held in order to A) Make people aware of the area churches and the YSO, B) To provide an opportunity for the general public to hear the  orchestra (as these concerts are free) C) To provide the uncommon opportunity for local church choir members to perform with an orchestra, and D) To educate the public about classical music.

Unfortunately, I do not have a video of the performance but here is a picture to give you an idea of the size of the ensemble. 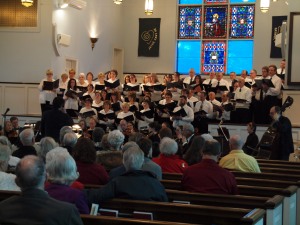 The Concert was a wonderful experience, both from a listener’s standpoint as we got to hear a professional orchestra perform for the price of showing up (a rare opportunity indeed for  a student on a budget) and from a performance standpoint. The orchestra played beautifully and it was a treat to hear so many well known pieces played (even if the majority of the audience did not seem to connect the titles to the pieces at first).  It did not hurt that the church itself was packed.Maestro Fleischer arranged an adaptation of I Believe that, though vocally simple, when added to the Orchestral Accompaniment that he composed, exploded with a fusion musical colors and excitement. Parts of it seemingly had a rock band flavor fused within the “classical” context, which added a distinct interest to the piece.  The choir also sang a heavenly, yet deafening rendition of You Are God by Mary McDonald that shook the rafters and almost brought the walls of Hubbard First Presbyterian down. As someone who normally has to lower the volume of my voice to blend in ensembles it was awesome to be able to sing at full volume for once, and I am sure that the rest of the choir got a thrill from this opportunity as well.

Overall it was a successful concert, and as an added feather in our cap, we have been invited to perform with the orchestra again in December.  It also helped that our fearless choir director, Page Lape, put in many hours with us to prepare us for this and that the choir was steadfastly dedicated to learning these parts like the back of their hands in many cases.

Now, onto why I believe there needs to be more of these types of concerts given during the year:

First of all, it is no secret that orchestras around the country are going bankrupt and disbanding as a result. There are many reasons for it, which include a decreased social value for classical music and the live performance of . Allowing the public, ultimately the people who become potential patrons of the live performance of classical music, a genuine chance to hear the difference of a live performance and become educated about the music is an excellent way to show them why this music has value and should be funded. It is a great advertisement for this music that is normally deemed as inaccessible or “boring” by the general public by displaying to the people its value in a less “high brow” atmosphere.

Secondly, concerts of this nature are a win win scenario for the parties involved. Both the establishment (in our case the church) and the orchestra get exposure to the general public. Thus, more people know that the Orchestra and venue exist as places that they may now want to go to in the future.

Thirdly, it is a fantastic way to share the joy and Love of Music making with other human beings. After all, an opportunity to bring people together for the purpose of sharing a sublime musical experience is a rare treat for all involved, and may add an ounce of happiness to someones life just by knowing that such an experience was shared.